In order to customize Maneage to your research, it is important to first understand its architecture so you can navigate your way in the directories and understand how to implement your research project within its framework: where to add new files and which existing files to modify for what purpose.

The project has two top-level directories: reproduce and tex. reproduce hosts all the software building and analysis steps. tex contains all the final paper's components to be compiled into a PDF using LaTeX. The image below shows the directory and file structure in a hypothetical project using Maneage. Files are shown with small, green boxes that have a suffix in their names (for example format.mk or download.tex). Directories (containing multiple files) are shown as large, brown boxes, where the name ends in a slash (/). Directories with dashed lines and no files (just a description) are symbolic links that are created after building the project, pointing to commonly needed built directories. Symbolic links and their contents are not considered part of the source and are not under version control. Files and directories are shown within their parent directory. For example the full address of format.mk from the top project directory is reproduce/analysis/make/format.mk. 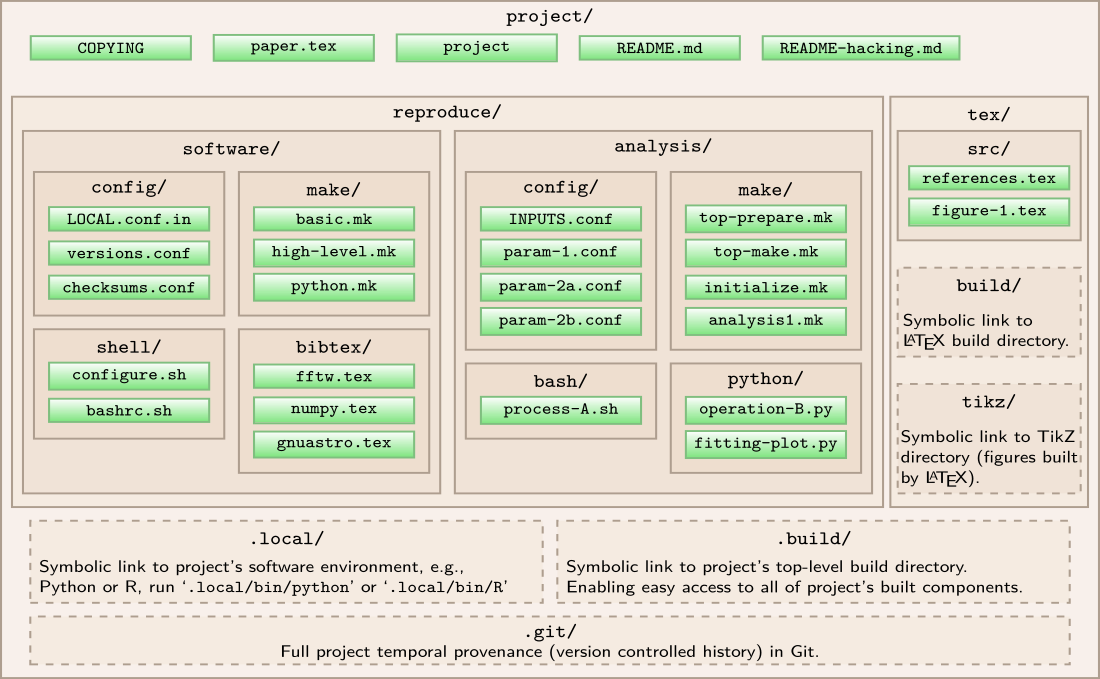 As shown above, the reproduce directory has two sub-directories: software and analysis. As the name says, the former contains all the instructions to download, build and install (independent of the host operating system) the necessary software (these are called by the ./project configure command). The latter contains instructions on how to use those software to do your project's analysis.

After it finishes, ./project configure will create the following symbolic links in the project's top source directory: .build which points to the top build directory and .local for easy access to the custom built software installation directory. With these you can easily access the build directory and project-specific software from your top source directory. For example if you run .local/bin/ls you will be using the ls of Maneage, which is probably different from your system's ls (run them both with --version to check).

Once the project is configured for your system, ./project make will do the basic preparations and run the project's analysis with the custom version of software. The project script is just a wrapper, and with the make argument, it will first call top-prepare.mk and top-make.mk (both are in the reproduce/analysis/make directory).

In terms of organization, top-prepare.mk and top-make.mk have an identical design, only minor differences. So, let's continue Maneage's architecture with top-make.mk. Once you understand that, you'll clearly understand top-prepare.mk also. These very high-level files are relatively short and heavily commented so hopefully the descriptions in each comment will be enough to understand the general details. As you read this section, please also look at the contents of the mentioned files and directories to fully understand what is going on.

Before starting to look into the top top-make.mk, it is important to recall that Make defines dependencies by files. Therefore, the input/prerequisite and output of every step/rule must be a file. Also recall that Make will use the modification date of the prerequisite(s) and target files to see if the target must be re-built or not. Therefore during the processing, many intermediate files will be created (see the tips section below on a good strategy to deal with large/huge files).

To keep the source and (intermediate) built files separate, the user must define a top-level build directory variable (or $(BDIR)) to host all the intermediate files (you defined it during ./project configure). This directory doesn't need to be version controlled or even synchronized, or backed-up in other servers: its contents are all products, and can be easily re-created any time. As you define targets for your new rules, it is thus important to place them all under sub-directories of $(BDIR). As mentioned above, you always have fast access to this "build"-directory with the .build symbolic link. Also, beware to never make any manual change in the files of the build-directory, just delete them (so they are re-built).

The configuration-Makefiles are those that satisfy these two wildcards: reproduce/software/config/*.conf (for building the necessary software when you run ./project configure) and reproduce/analysis/config/*.conf (for the high-level analysis, when you run ./project make). These Makefiles don't actually have any rules, they just have values for various free parameters throughout the configuration or analysis. Open a few of them to see for yourself. These Makefiles must only contain raw Make variables (project configurations). By "raw" we mean that the Make variables in these files must not depend on variables in any other configuration-Makefile. This is because we don't want to assume any order in reading them. It is also very important to not define any rule, or other Make construct, in these configuration-Makefiles.

Following this rule-of-thumb enables you to set these configure-Makefiles as a prerequisite to any target that depends on their variable values. Therefore, if you change any of their values, all targets that depend on those values will be re-built. This is very convenient as your project scales up and gets more complex.

The workhorse-Makefiles are those satisfying this wildcard reproduce/software/make/*.mk and reproduce/analysis/make/*.mk. They contain the details of the processing steps (Makefiles containing rules). Therefore, in this phase order is important, because the prerequisites of most rules will be the targets of other rules that will be defined prior to them (not a fixed name like paper.pdf). The lower-level rules must be imported into Make before the higher-level ones.

All processing steps are assumed to ultimately (usually after many rules) end up in some number, image, figure, or table that will be included in the paper. The writing of these results into the final report/paper is managed through separate LaTeX files that only contain macros (a name given to a number/string to be used in the LaTeX source, which will be replaced when compiling it to the final PDF). So the last target in a workhorse-Makefile is a .tex file (with the same base-name as the Makefile, but in $(BDIR)/tex/macros). As a result, if the targets in a workhorse-Makefile aren't directly a prerequisite of other workhorse-Makefile targets, they can be a prerequisite of that intermediate LaTeX macro file and thus be called when necessary. Otherwise, they will be ignored by Make.

Maneage also has a mode to share the build directory between several users of a Unix group (when working on large computer clusters). In this scenario, each user can have their own cloned project source, but share the large built files between each other. To do this, it is necessary for all built files to give full permission to group members while not allowing any other users access to the contents. Therefore the ./project configure and ./project make steps must be called with special conditions which are managed in the --group option.

Let's see how this design is implemented. Please open and inspect top-make.mk it as we go along here. The first step (un-commented line) is to import the local configuration (your answers to the questions of ./project configure). They are defined in the configuration-Makefile reproduce/software/config/LOCAL.conf which was also built by ./project configure (based on the LOCAL.conf.in template of the same directory).

The next non-commented set of the top Makefile defines the ultimate target of the whole project (paper.pdf). But to avoid mistakes, a sanity check is necessary to see if Make is being run with the same group settings as the configure script (for example when the project is configured for group access using the ./for-group script, but Make isn't). Therefore we use a Make conditional to define the all target based on the group permissions.

Having defined the top/ultimate target, our next step is to include all the other necessary Makefiles. However, order matters in the importing of workhorse-Makefiles and each must also have a TeX macro file with the same base name (without a suffix). Therefore, the next step in the top-level Makefile is to define the makesrc variable to keep the base names (without a .mk suffix) of the workhorse-Makefiles that must be imported, in the proper order.

In short, to keep things modular, readable and manageable, follow these recommendations: 1) Set clear-to-understand names for the configuration-Makefiles, and workhorse-Makefiles, 2) Only import other Makefiles from top Makefile. These will let you know/remember generally which step you are taking before or after another. Projects will scale up very fast. Thus if you don't start and continue with a clean and robust convention like this, in the end it will become very dirty and hard to manage/understand (even for yourself). As a general rule of thumb, break your rules into as many logically-similar but independent steps as possible.

During the research, it often happens that you want to test a step that is not a prerequisite of any higher-level operation. In such cases, you can (temporarily) define that processing as a rule in the most relevant workhorse-Makefile and set its target as a prerequisite of its TeX macro. If your test gives a promising result and you want to include it in your research, set it as prerequisites to other rules and remove it from the list of prerequisites for TeX macro file. In fact, this is how a project is designed to grow in this framework.

While Git does an excellent job at keeping a history of the contents of files, it makes no effort in keeping the file meta data, and in particular the dates of files. Therefore when you checkout to a different branch, files that are re-written by Git will have a newer date than the other project files. However, file dates are important in the current design of Maneage: Make checks the dates of the prerequisite files and target files to see if the target should be re-built.

To fix this problem, for Maneage we use a forked version of Metastore. Metastore use a binary database file (which is called .file-metadata) to keep the modification dates of all the files under version control. This file is also under version control, but is hidden (because it shouldn't be modified by hand). During the project's configuration, Maneage installs to Git hooks to run Metastore 1) before making a commit to update its database with the file dates in a branch, and 2) after doing a checkout, to reset the file-dates after the checkout is complete and re-set the file dates back to what they were.

In practice, Metastore should work almost fully invisibly within your project. The only place you might notice its presence is that you'll see .file-metadata in the list of modified/staged files (commonly after merging your branches). Since its a binary file, Git also won't show you the changed contents. In a merge, you can simply accept any changes with git add -u. But if Git is telling you that it has changed without a merge (for example if you started a commit, but canceled it in the middle), you can just do git checkout .file-metadata and set it back to its original state.

Based on the explanation above, some major design points you should have in mind are listed below.